Minnesänger: Eberhard Kummer
Troubadour: René Zosso
A video collage of some live videos available on web of this two outsider of the early music.
Their approach isn't academic but sauvage and inspired. When we listen to their interpretations and when we look at them playing, we can feel the real spirit of popular and courtly side of medieval music.
•••
Eberhard Kummer: 2 August 1940 – 12 July 2019
He was an Austrian concert singer, lawyer and an expert of medieval music.
He played the hurdy-gurdy, the harp and the guitar, and made important contribution to the restoration of medieval and the Austrian folksong. He received training as a classical bass-baritone. After an initial career as classical singer, he gradually specialized in restoring traditional Austrian folksongs and original medieval music from Europe, such as the German epic Nibelungenlied or medieval Minnelieder. He had recorded many works by the most important minnesanger like Neidhart von Reuental, Oswald Von Wolkenstein, Walther von der Vogelweide, Hugo von Montfort. He had also collaborated with many important ensemble like Clémencic Consort and Paul Hofhaimer Consort Salzburg.
•
René Zosso: Geneva 1935
He is a Swiss vielleur and singer, specialized in medieval music.
René Zosso discovers the hurdy-gurdy when he sees the famous duo composed by Jules Devaux and Édith Montardon called "la Marie", who play on a terrace of a bistro in Lausanne. He participated in his first hurdy-gurdy course, around 1961, in Poitiers, under the teaching of Georges Simon.
Contrary to the idea that the hurdy-gurdy is an instrument that accompanies dance, René Zosso used it for singing and putting the voice on the drones. From there, an eternal quest for modality and the study of ancient repertoires.
He collaborates with many composers and musicians, in particular with René Clemencic, Anne Osnowycz and Jordi Savall. 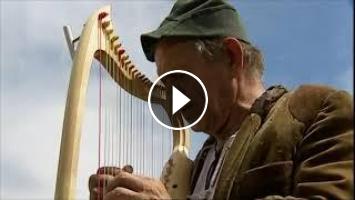 Minnesänger: Eberhard Kummer Troubadour: René Zosso A video collage of some live videos available on web of this two outsider of the early music. Thei...